Embodied Doula Trainings began after co-founder Zoë Etkin moved back to Memphis (her hometown), from Los Angeles, to be closer to family. She wasn’t sure what kind of doula community she would encounter in Memphis, but she was hopeful that she would make a doula home there. After about a year of integrating herself into the local birth world, she realized there were no Memphis-based doula trainers, and that there was not only a need for one, but for more doulas too. After considering several existing organizations, Zoë landed on founding her own, thus EDT was born!

Zoë knew that if she was going to put in the time and effort to create her own organization, it had to be different and better than what’s already out there. Over a decade of work in this field, she saw how frustrated the doula community has been with the dominant doula training paradigm, scope of practice, and lack of business training. She also felt there was a lack of embodied education in the mass market trainings, leaving doulas with little tools to support the inner landscape of pregnancy, birth, and postpartum. So with a blend of psychospiritual emphasis, evidence based information (and acknowledgement of the problems of evidence), mammalian instincts, knowledge of the nervous system, and affirmation of the sexuality of the birth and postpartum experience, she established the Embodied Method of doula work and began writing the curriculum.

As she prepared for the first training, to take place in the fall of 2020, she realized that she had taken on something bigger than herself. She reached out to an old friend, postpartum doula colleague, and fellow poet, Celina Wigle-Olias-Varga (who serves the NYC area), to see if she may have interest in training doulas too. Celina said yes, she had been interested in training doulas, and their relationship as co-founders of EDT was cemented. Celina and Zoë had been student-colleagues of The Artemis School and felt that their shared embodiment experiences lended to a perfect blend of minds. Their collaboration, and that of the soon to be other EDT trainers, results in what you see today.

Since then, the organization has trained doulas all over the country, with virtual trainings, and in-person based trainers in Memphis, NYC, CT, and CA (with more locations to come). 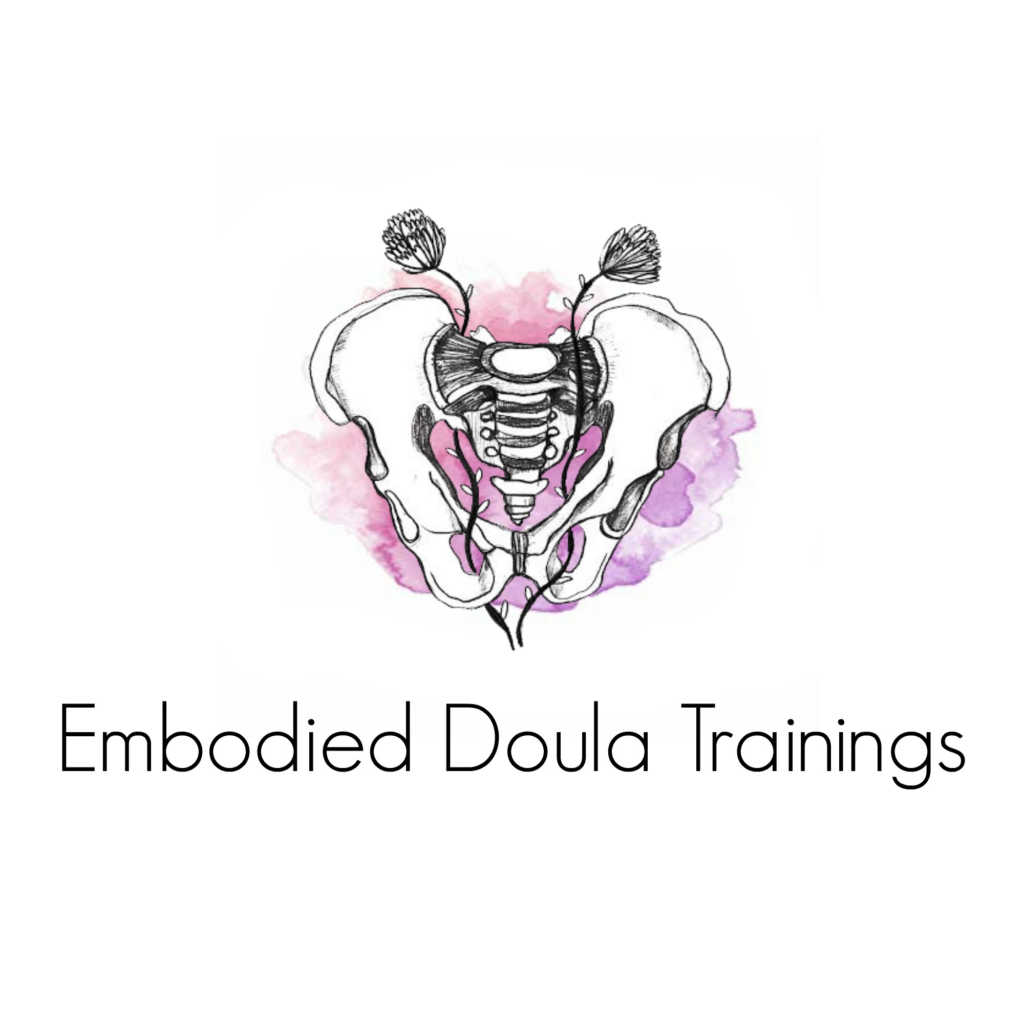 Our organization is based upon a belief that family-making (conception, pregnancy, birth, the postpartum period, parenting) is a profound rite of passage, an inherently mammalian act (as we say, our “human animality”), and an experience that transcends and simultaneously coalesces the inner and outer world of one’s body & psyche. We champion evidence based medical care while also respecting traditional medicine as equally valid, and we acknowledge the racism and xenophobia that western scientific inquiry is mired in. We believe in educating the public on the biological norms of birth, bodyfeeding, and babies, while supporting families in finding ways of navigating their journey within their own context, and in the context of our contemporary society. We understand the importance of the gestational parent-baby dyad, and celebrate that there are many ways to make a family. We believe it is imperative that we make our trainings accessible to those doulas whose communities need representation most. We see that our medical system was designed to disregard patient autonomy and is often harmful to birthing families, and we create action to make positive changes. We promote bodily autonomy and integrity for all, including babies. We elevate the voice of the physical and energetic body as it relates to these lived experiences. We affirm, we listen, we value, and we center our clients in their journey.

To promote the doula role as one of advocacy and social justice work.

To promote the embodiment philosophy inclusive of connecting our clients to the voice of their body and their intuition; recognizing our “human animality”; honoring the sexuality of birth and human sexuality in general; and honoring the inner psychic/spiritual landscape of pregnancy, birth, and early parenthood.

To promote that babies are people with personhood and inherent rights to respect.

To support new parents in navigating their evolving identities and roles.

To educate doulas in a way that sets them up for successful, sustainable careers, including business coaching, tangible insight into how to practice as a doula, and ongoing mentorship.

Zoë is a Memphis, TN, based Postpartum Transformation Guide, doula team leader/mentor, childbirth educator, and, of course, EDT doula trainer. She also practices scar tissue remediation and somatic bodywork, in addition to her career as a poet/writer.

Zoë has been in the birth world for a decade, serving countless families in Los Angeles, and then Memphis, as a birth & postpartum doula and childbirth educator. Moving to Memphis inspired her to found Embodied Doula Trainings.

Postpartum physical healing, especially scar tissue, is of utmost interest to Zoë, and she is currently in training with the esteemed Ellen Heed and her STREAM (Scar Tissue Remediation, Education, and Management) school.

Zoë earned her BA in Creative Writing from the College of Santa Fe, and her MFA in Poetry and Critical Studies from California Institute of the Arts. Her forthcoming poetry collection, The Mother Myths, explores the identity shift into early motherhood. Learn more about her at www.thememphisdoula.com.

Celina is a co-founder of Embodied Doula Trainings

Hi there! My name is Celina Wigle-Olias-Varga. I am a Postpartum Doula, Sexual Wholeness Mentor, and Bringing Baby Home Educator from Portland, OR, now living and supporting new families in NYC.

I received my BA in English Literature from Portland State University where I also studied Child Development, Linguistics, Genetics, Microbiology, Psychology, and Human Sexuality. I certified as a Postpartum Doula through CAPPA in 2013 and received my certificate as a Sex Educator and Practitioner of Women’s Holistic Sexuality from The Artemis School of Women’s Sexual Wellness in 2016. I am currently a graduate student at Widener University pursuing an MSW and licensure as a Perinatal Sex Therapist through the AASECT with an estimated practice date of May 2023.

When I’m not immersed in my work I enjoy bicycling, nature walks, and occasionally dusting off my sewing machine. Learn more about Celina at www.dayonedoula.com

Samantha Davis is a certified birth doula, childbirth educator, women’s wellness expert, author, and feminist. Above all else, she is a mother, mentor, and friend. Samantha has a passion and heavy focus on women’s sexual and reproductive well-being. She has been supporting families and helping women discover their innate gifts and capabilities for over a decade. When she isn’t helping a mama or exploring the world, she is at home in California adventuring outdoors with her family.

When I’m not talking about babies and breasts I’m being a wife, mother of 2, mentor, sister, and prayer partner. I am the owner of two businesses, Reinbows and WhatTheDoula and I’ve spent the last 8 years in education. I hold a Bachelor’s of Science in Accounting & Spanish and a Master’s of Education in Higher Education Administration and Leadership. I am and Birth and Postpartum Doula who is committed to increasing awareness amongst minority women around their voice and choice in their birthing experience. I believe all parents deserve to experience true wellness and safety during the 4th trimester.

I started my journey becoming a doula supporting friends and family members emotionally and through research. My doula training consists of mentorship with Kira Kimble of TrainwithKira.com, Advanced Postpartum Doula training with Zoë Etkin: Embodiment Doula (Feb 2020), Rebyrth Birth Doula training & certification through National Black Doula Association (June 2020), and I am in process to certify as a Certified Lactation Counselor through Healthy Children Project and the Academy of Lactation Policy and Practice. I am also a certified 200 hr YTT Yoga instructor, trained in baby-wearing, infant massage, Infant CPR and First Aid and love helping families navigate these areas as needed.

I believe it is important to educate ourselves on the things that are happening to our body and why they are happening. I know there are some conversations around birth, maternal care, breastfeeding, newborn care, and so much more that we aren’t discussing because we don’t have the outlet and I want to create that space. It’s through education, awareness of mistreatment, and advocacy that we can make positive strides in black maternal healthcare.

My name is Melissa Dueñas-Witter and I have been a Doula for 9 years serving families inConnecticut, Massachusetts and Rhode Island. In addition to doula work I am also a childbirth educator, lactation counselor, reiki practitioner, doula mentor and now excited to be a Doula Trainer for Embodied Doula Trainings.

Through love, logic, education, advocation and a little bit of trust in the universe, I’ve helped over 400 families achieve powerful birth experiences that will impact them for years to come. I don’t believe in a healthy baby being the only end goal, but a mentally well and supported parent being my top priority. I’m extremely passionate about respect and options when birthing multiples, vaginal birth after cesarean, and impacting birth disparities for POC and LGBTQIA+ community.

I am an indigenous woman who brings a bit of my culture into all of the things that I do. I have 2 biological sons who are 6 and 8 years old. They keep me on my toes for sure. I enjoy traveling, food experiences and hosting friends and family. I also run New England’s largest doula collaborative in hopes of reducing horizontal violence in the birth worker community.